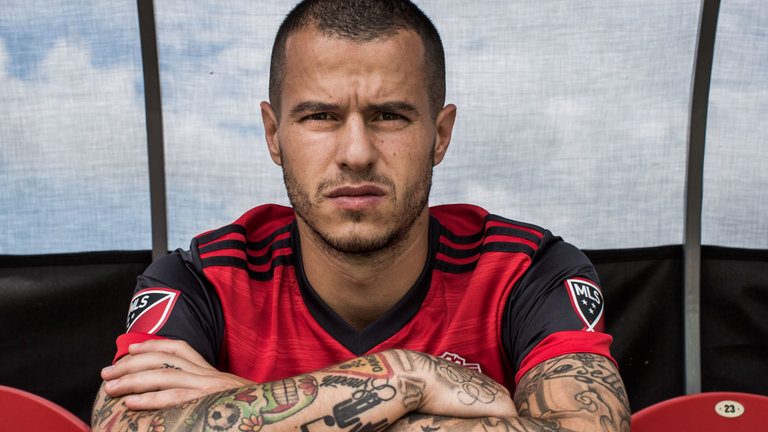 The story of Sebastian Giovinco is that of a great talent who persued a footballing career in local football. And up to a point everything seemed to go in this direction: protagonist in Juventus, then the national team, the affection of the public. But the discontinuity and a football movement that focuses more and more on physicality and less on technique has led him to make a radical choice: the experience in Canada, in Toronto FC.

Sebastian Giovinco is from Turin and, above all, a Juventus fan. His favourite team loaned him when he was not yet eigthteen and he makes his debut wearing the black and white shirt in the Serie B season, in the home match with Bologna, also providing an assist to David Trezeguet. The great talent of the atomic ant (as he is called for its short stature) seems to address him to a predestined future. But the young age and the alternating fortunes mean that this boy will be off to gain experience first in Empoli and then in Parma.
In the province, Seba shows off all his talent, also scoring some poisoned goal to his favorite team, guilty of not having really believed in him yet.

At the end of two very positive years in Emilia, Juventus finally calls him back determined to focus on the small talent grown in the shadow of the Mole. The return season for Juventus is all in all positive with 11 goals in 42 games. The following year, however, the arrival of Carlos Tevez relegates Giovinco to a supporting role and his playing time drops significantly. Finally, in 2014-15, the arrival of Allegri on the bench does not change the situation of the atomic ant, which in January receives an indispensable economic offer. Toronto FC wants him, offering him a sumptuous contract as long as Juventus free him. The Juventus company decides to satisfy the Turin talent, who is preparing for an adventure that will immediately make him a protagonist.

In the first 12 games in Canada Sebastian Giovinco scores 7 goals and provides six assists. It is only the beginning of an extraordinary season, which will see the boy graduate as tournament top scorer and driver of Toronto FC. The rather modest team even manages to reach the playoffs thanks to him. Sebastian, in fact, achieves the absolute record of the all-time ranking of goals plus assists, with 35 points. In a few months the MLS has already been conquered. In the following year he was awarded the best debutant of the 2015 season of the US championship, as MLS player of the year, in addition to winning the MLS Golden Boot.

The second year in Canada definitively consecrates the atomic ant, which scores 21 goals, with as many as 15 assists, in addition to various sensational games. His performances are contagious for other Toronto FC players, that reach the MLS final, losing the game to penalties against Seattle Sounders. A partial rematch, however, will be in the MLS Cup 2017, in a 2-0 win by Toronto. Needless to say, Sebastian Giovinco enters both goal actions.

The treble with the Canadians

The title is however only postponed. In that year, again with Sebastian Giovinco, Toronto FC wins its first MLS title, in addition to the Supporters’ Shield, the trophy awarded to the Major League Soccer team that obtains the most points in the general regular ranking season. It is a historic treble, who pushes Canadian footballers and above all their talented leader into the myth.

The past year has seen a decline of the team in the league, which for the first time with Giovinco it does not qualify for the playoffs. The cause of this debacle is due to the change in the company’s goals, which focuses entirely on the CONCACAF Champions League. Toronto FC, in fact, reached the final against the Mexicans of Guadalajara. Despite the goal in the final return, however, Giovinco is unable to give the prestigious trophy to his teammates. The penalties are indeed fatal to Canadians.

By now, however, Sebastian Giovinco is a true idol of Canadian supporters. In a recent interview, the boy also said he wanted to end his career in Canada, where he finally managed to express himself to his full potential and where he is the highest paid player in the league. Finally, this experience also gave him the return to the Italian national team three years after the last qualification. And who knows, he may be the man to start from.

Recent articles from the Network

To Top
We use cookies to provide you the best experience on our site. If you continue to use this site we will consider that you are aware of it.Ok